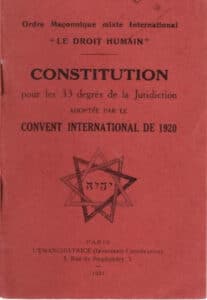 Let’s go back in history:
In 1882 a woman, Maria DERAISMES, was received as a Freemason in a male lodge, benefiting from the same ritual as her Brothers. But this promising fact was not followed by any other, given the almost unanimous opposition of the Brothers of all the Masonic Obediences to the access of women to Freemasonry.

Second constituent element: In 1901, the existence of the Supreme Universal Council of the Masonic Rite for Men and Women was made public. From now on, Brothers and Sisters can go through the complete initiatory scale (1st to 33rd degree) of the Ancient and Accepted Scottish Rite.

Particularity of this new masonic power: Contrary to the other Supreme Councils, organised at that time on a national basis, the Supreme Council of the Masonic Rite for Men and Women was intended to be universal, thus introducing the third constitutive element of LE DROIT HUMAIN: internationalism.

These three elements, both gender representing, internationalism and initiatory continuity in 33 degrees, made the structure and still make it unique!

We had the foundations and the building blocks. All that remained was to cement the walls and put the roof on the building. From 1901 onwards, the Order developed and lodges were set up all over the world (England, the United States, the Netherlands, etc.).

It became necessary to establish links between them through an assembly of delegates. In 1912, aware of the importance of such a meeting, Brother Founder Georges MARTIN announced his intention to organise an International Convention in 1914. Alas, the profane events that shook the world at the beginning of the twentieth century and the death of Brother MARTIN did not allow this “dream” to become a reality until 1920.

In August 1920, 56 Masons, representing more than a hundred lodges, from the 25 countries where LE DROIT HUMAIN was represented, worked on the writing of an International Constitution which, while respecting the tradition of the Ancient and Accepted Scottish Rite, allowed it to adapt to the needs of the moment and to be transformed in the future.

If the year 1893 represents the starting point, the laying of the foundation stone, the year 1920, marks a second, no less crucial step in the history of the Order, that of the completion of a solid and durable house. The impact of this first International Convention was considerable and we are still benefiting from its effects today.

Let us quote Brother Louis GOAZIOU, representing American lodges in 1920: “For the first time, delegates who not only came from distant countries and spoke different languages, but also had religious, philosophical and political opinions that were, so to speak, opposed, came together to form a Declaration of Principles and an International Constitution that would link them in a common work…”.

The reality of LE DROIT HUMAIN today is this: an international and pluralist Freemasonry, rich in all cultural differences in the broadest sense of the term – social, religious, political, philosophical. Also rich with differences in the way of approaching and living the masonic commitment. The Order has never been monolithic. This first International Convention confirms that its specificity, the very reason for its existence, is to be a vector of a plurality that approaches all the aspects and steps of the masonic path from different points of view, putting them in relation to each other. All the currents that run through the Order and coexist within it have the same interest as long as they are in line with the great ideals expressed in the Declaration of Principles of the International Constitution since 1920.